I’m no Latin scholar, but I remember my colleague Nigel Collar explaining to me that the word ‘auspicious’ derives from the Latin word auspex, meaning ‘one who looks at birds’ (avis – bird; spex – observer). In ancient Rome, a leader was often accompanied by an auspex, whose role was to interpret omens based on their observations of birds, which in turn guided public policy by predicting whether certain actions would bring good or bad fortune.

The publication of the second European Breeding Bird Atlas (EBBA2; Keller et al. 2020) by the European Bird Census Council (EBCC) in December 2020 was undoubtedly an auspicious event. Packed with data collected 30 years after fieldwork for the original atlas (EBBA1; Hagemeijer & Blair 1997), EBBA2 shows not only the current distribution and abundance of Europe’s avifauna, but also the changes wrought by developments in land use, climate and other factors since EBBA1. Rather than the predictions of a single Roman seer, EBBA2is based on millions of observations by 120,000 volunteer fieldworkers across the continent, representing one of the largest citizen science biodiversity projects ever undertaken.

The review in BB (Brit. Birds 114: 180–181) concluded that ‘this book is an incredible achievement and should be an inspiration to those who see ornithology and conservation from a global perspective.’ As a birder and an employee of BirdLife International, the world’s largest nature conservation partnership, I fully agree. I am both impressed and inspired. 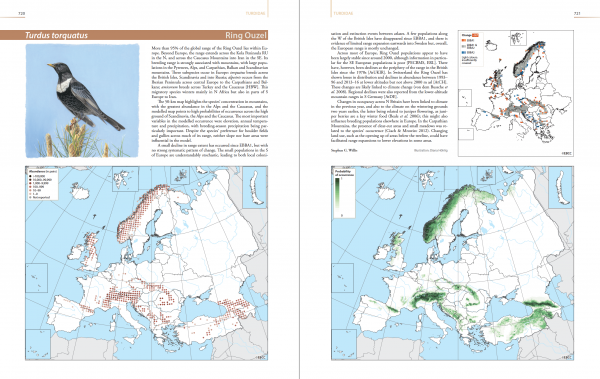 As the Red List Authority for birds, BirdLife evaluates the global extinction risk of all c. 11,000 bird species for the IUCN Red List. Several of the Red List criteria require species’ geographic ranges to be mapped, so that their overall size and configuration can be quantified and assessed against various thresholds (IUCN 2012). Bird atlases are one of the most important sources of information available, especially those covering large countries or even continents. The wealth of new data in EBBA2 will enable us to update our maps for around 5% of the world’s bird species and evaluate how the species’ ranges have changed, helping to ensure that the relevant Red List assessments continue to be based on the best available information. This work has already begun, with EBBA2 being used as a key reference by colleagues updating the European Red List of Birds, due for publication later in 2021.

Europe has strong legislation for bird conservation. The European Union (EU) Birds Directive (transposed into national legislation via laws such as the UK Wildlife & Countryside Act 1981) provides basic protection to all species, and requires EU Member States to take special conservation measures for c. 200 species listed as ‘threatened’ on Annex I. One key measure is the designation of the most suitable sites as Special Protection Areas (SPAs), part of the Natura 2000 network. Across Europe, the Council of Europe’s Bern Convention on the Conservation of European Wildlife and Natural Habitats requires its Member States to do likewise for a virtually identical list of species, by protecting key sites as part of the Emerald Network (the equivalent of Natura 2000 outside the EU).

The maps in EBBA1 helped BirdLife to locate, identify and document many Important Bird Areas (IBAs) in Europe as priority sites for conserving these species (Heath & Evans 2000). Following extensive policy advocacy efforts, thousands of IBAs have since been designated as SPAs or Emerald Network sites. The subsequent protection and management of these sites has benefited many species, by arresting or preventing declines and facilitating some spectacular recoveries. The EBBA2 change maps show impressive range expansions for iconic species like White-tailed Eagle Haliaeetus albicilla (fig. 2)and Eurasian Spoonbill Platalea leucorodia. Indeed, comparing the distributions of all Annex I species in EBBA1 and EBBA2 reveals a general increase in species richness at 50-km square scale, consistent with other evidence that the Birds Directive and SPAs have had a positive influence on bird population trends in Europe (Donald et al. 2007; Sanderson et al. 2016). 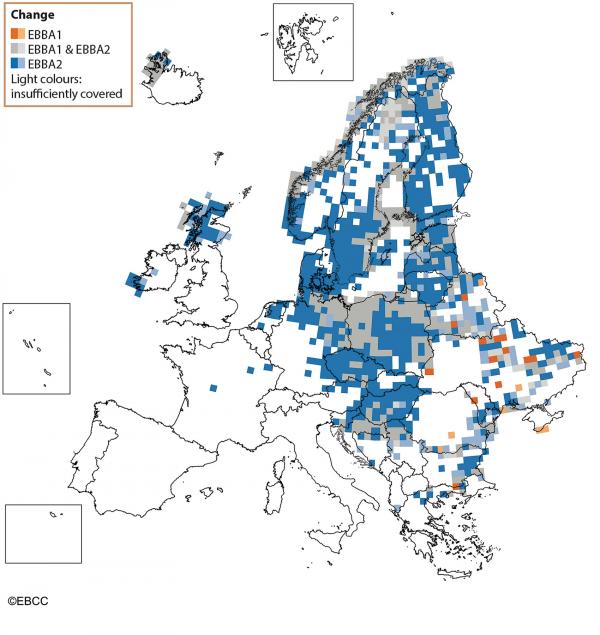 Unfortunately, as repeated Red List assessments have revealed, more European bird species are deteriorating in status than improving (BirdLife International 2015). EBBA2 shows dramatic range contractions for species like Great Bustard Otis tarda, Ruff Calidris pugnax (fig. 3), European Roller Coracias garrulus and Red-footed Falcon Falco vespertinus. By mapping the current distribution of species, and showing where they have spread or disappeared, EBBA2 highlights where conservation is working and must continue, but also where there is a need for better implementation and enforcement. It also indicates where more protected areas may be needed as species’ ranges shift in response to climate change, and where habitats should be restored and connectivity enhanced. This is especially true for species for which EBBA2 presents the modelled probability of occurrence for each 10-km square within their range, allowing more targeted measures than the standard 50-km square maps. 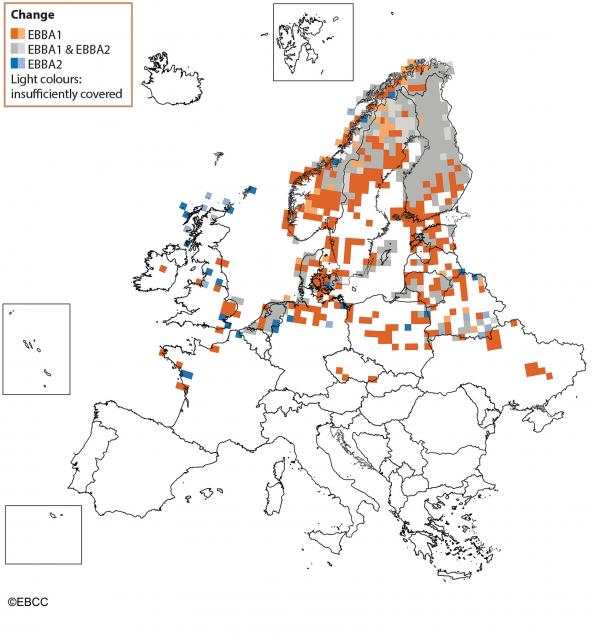 However, not all species can be conserved effectively by a site-based approach. Many of the species suffering the steepest population declines between EBBA1 and EBBA2 are – or were formerly – common and widespread farmland and grassland birds. In a single human generation, some of these species have halved in abundance, as shown by the EBCC/BirdLife Pan-European Common Bird Monitoring Scheme (www.pecbms.info). Population declines of this magnitude are not always evident from the 50-km scale maps in EBBA2, but even at this coarse scale it is clear where some species are plummeting or have vanished, with all the repercussions for ecosystem services that this entails.

Although the overall number of native bird species breeding in Europe has barely changed between the two atlases, the distribution of many species has changed significantly since EBBA1. The change in the number of species varies greatly between biogeographic regions, but the coldest regions (Arctic and Alpine) have gained the most species while the warmest (Mediterranean) has experienced a net loss, and the average number of species per 50-km square has increased remarkably in the Boreal region. The northward shift of many speciesis in line with projections based on climate-change scenarios (e.g. Huntley et al. 2007), suggesting that climate change is already a major factor driving bird distribution shifts in Europe. However, not all species have shifted as predicted, highlighting the importance of interactions with land-use change and other influences.

More analysis is required, but it is already clear that the drivers of bird range contractions and population declines have not been adequately addressed, especially regarding the reform of relevant sectoral land-use policies. If the publication of EBBA2 is to be truly auspicious, then it must herald a transformative change – not only in policies, but also in attitudes, behaviour, investment, governance and other factors that determine whether conservation succeeds or fails. Hopefully, the compelling nature and scale of the change maps in EBBA2 will help to convince decision makers that enough is enough and encourage them to grasp the opportunities offered by the European Green Deal, the post-2020 global biodiversity framework and the UN Decade on Ecosystem Restoration.

Such a response would be a fitting testament to the efforts of so many people to gather data for EBBA2, which is a shining example of the strength of civil society and ornithology across Europe. This enormous effort in bird monitoring should not be taken for granted, and every effort should be made – by governments, as well as volunteers – to continue, expand and replicate it in future. Atlases are valuable for many reasons, including research, policy, education and recreation. For conservation, they provide fundamental information on where birds occur and how their distribution and abundance change over time, to inform action and ensure it is effective. The data in EBBA1 have underpinned bird science and conservation in Europe for the last three decades (Herrando et al. 2019). With its more complete coverage, 50-km change maps and 10-km modelled maps, EBBA2 is destined to be even more influential, arriving at a critical time for bird conservation.

Thanks to Ariel Brunner, Mark Eaton, Mark Holling, Iván Ramírez and Anna Staneva for their helpful comments and encouragement, and to Mark Eaton and Sergi Herrando for supplying the figures from EBBA2.

Ian Burfield is Global Science Coordinator (Species) at BirdLife International, where he oversees Red List updates and supports the Preventing Extinctions Programme. Previously, he spent a decade working for BirdLife Europe on species and sites.

In praise of Notes