Probable breeding of Great Grey Shrikes in Scotland in 1969

A review of the Rare Breeding Birds Panel (RBBP) paper archive in recent years has resulted in some discoveries which have hitherto not been published. This short paper documents a report of a potential breeding pair of Great Grey Shrikes Lanius excubitor in Highland in 1969, retrospectively submitted to the RBBP in 1978.

The Great Grey Shrike breeds in open landscapes with scattered trees, bushes and other perches from which it can hunt. The species breeds across Fennoscandia and northern Europe, from Germany eastwards into Russia. Isolated breeding populations occur in south-central and northwestern France and southern Belgium (Keller et al. 2020). However, between 1985–88 and 2013–17, the species’ range contracted at its western edge (Keller et al. 2020; fig. 1). 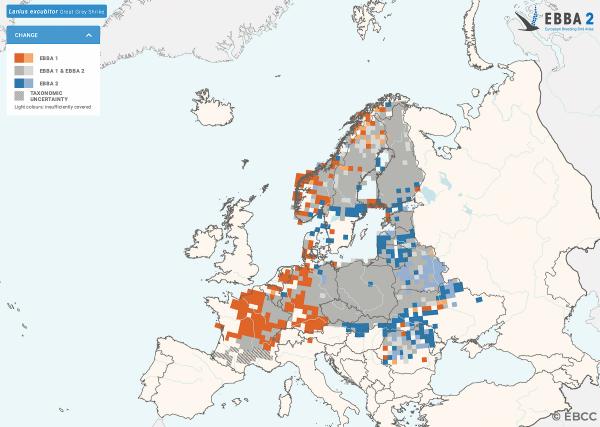 In Britain, the species occurs as a scarce migrant and winterer, with around 100–200 recorded annually (White & Kehoe 2021). There have never been any documented confirmed breeding records of Great Grey Shrikes in the UK, though there are records in the RBBP archives of single birds summering in Lincolnshire from 25th May to 14th June 1975, in Suffolk from 18th May to 8th July 1991 and in Cumbria from 4th April to 3rd August 2009 (though the bird was absent from the site between 10th April and 30th July). In 2017, a wintering bird lingered in Devon until 28th May and was heard singing towards the end of its stay (Holling et al. 2019) and, in 2019, one was recorded singing at a different, though nearby, site in Devon during its five-day stay in April (Eaton et al. 2021). Under RBBP criteria, all of these records were documented as instances of possible breeding. A number of territorial birds in spring in Strathspey, Highland, including the occasional singing bird, are alluded to in Dennis (1995), but such records have not been submitted to RBBP. 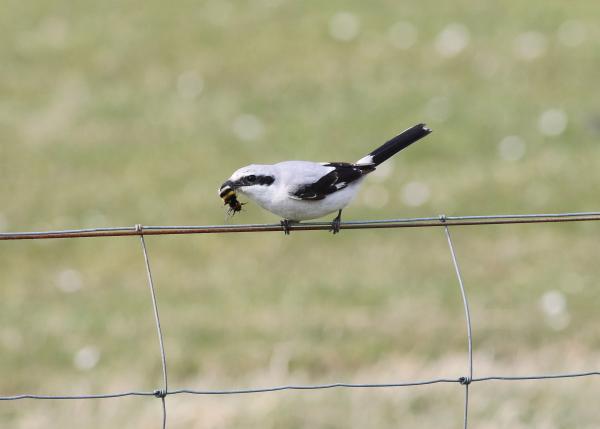 After reading the 1976 report of the RBBP (Sharrock et al. 1978), an observer – who could not be contacted during the preparation of this manuscript – noted the record of the summering Great Grey Shrike in Lincolnshire in 1975. He wrote to Tim Sharrock, then Secretary of RBBP, with details of an observation from Highland in the second week of June 1969. This period pre-dated the formation of the RBBP in December 1972 (Sharrock 1973) so was not included in any of the Panel’s published reports. The observer’s letter reads: ‘[During a roadside stop while travelling north from Drumnadrochit towards Beauly,] my attention was drawn to a Common Gorse Ulex europaeus bush, between [45 m and 90 m] away, by periodic harsh, short call notes. I noted movement in the gorse bush, which was either overgrown or sheep-grazed, having cover at the top but was fairly open at the sides. Examination of the bush through binoculars revealed a Great Grey Shrike behaving in an agitated manner, keeping generally low in the bush but moving frequently to the top. A few minutes later, it was joined by a second Great Grey Shrike carrying what appeared to be a small vole. The first bird then became even more excited and uttered several more harsh calls. After some few seconds, an exchange of prey occurred. The first bird, then with the prey, left and flew towards distant trees in the valley leaving the second bird. After about three to five minutes, the second bird left in the opposite direction flying over the moors.’

The observer goes on to say that a single shrike was seen in the same bush later in the week and, at the end of the week, two shrikes were seen flying together at the location. He further explained that he had many years of experience of wintering Great Grey Shrikes in his home county of Lincolnshire, but failed to realise the possible significance of his observations at the time.

It is clear that the observed behaviour strongly suggests a pair in breeding habitat taking food to young somewhere in the vicinity. The habitat in this area is now open heather Calluna moorland with scattered trees and bushes, and it is likely that it would have been similar almost 55 years ago. Cramp & Perrins (1993) report that eggs are laid mostly from April or early May in the core range, so it is feasible that young would be in the nest or already fledged by mid June.

This 1969 record is of considerable importance but, given the lack of any sighting of young or a nest, there is insufficient evidence for this to be classed as a record of confirmed breeding by Great Grey Shrikes. However, the RBBP believes that this record should be published as the first probable breeding record by Great Grey Shrikes in the UK.

Acknowledgments
I would like to thank everyone who has been involved with the Rare Breeding Birds Panel over its long history, without whom there would be no archive from which to draw material for this paper. The RBBP would also like to thank the original observer of this important record for sending the information to them. Had he not realised the significance of the record, we could never have documented it for the ornithological record.

Mark Holling was Secretary of the Rare Breeding Birds Panel between 2006 and 2020. Since retiring, he has remained on the Panel and is now concentrating on ensuring that the RBBP archive is as accurate and complete as possible.

Editorial comment Mark Eaton, RBBP Secretary, commented: ‘The Rare Breeding Birds Panel held its first meeting as an independent body in April 1973 and will be celebrating 50 years of monitoring the UK’s rarest breeding birds in 2023. To mark our anniversary, we have a number of activities planned, including new papers, website developments and an RBBP conference to be held online in spring 2023. Over this past half century, we have amassed a huge wealth of data (over 180,000 records) in our secure archive, including some eye-catching records such as the probable breeding of Great Grey Shrikes described here. We intend to publish more such “From the RBBP archives” papers in the future, with one on the breeding of Spotted Sandpipers Actitis macularius in the UK currently in preparation.

‘We are, nonetheless, aware that our archive is incomplete, particularly from the earlier years. Many of the records we hold lack site details, or have been summarised at county or regional scales. This incomplete recording was particularly prevalent for the rarest breeding birds; for example, the RBBP database is missing site details for 15 of the 27 records of Lapland Bunting Calcarius lapponicus in the database, and 26 of 72 records for Temminck’s Stint Calidris temminckii. It took many years for some observers to trust the RBBP with full data (although some data is still reported at coarse spatial scales to this day, hampering its value for conservation and research use). With nigh on 50 years without a single occasion of inadvertent release or misappropriate use of RBBP data, we believe that any fears around entrusting the RBBP with sensitive data should now be allayed, and we are appealing to all those who might hold such data on historical breeding records to share it retrospectively before it is lost from the ornithological record. In particular, we are keen to receive records of the breeding or potential breeding of extremely rare breeders not shared previously, and site information for records for which this was withheld in original submissions.

‘By 2025, the RBBP will hold data spanning 50 years of change in the UK’s rare breeding birds, and we are planning to publish a range of new analyses and species’ accounts based on this data, so now is the ideal time to ensure we are doing so based upon the best possible information. Observers may be uncertain about which details may have already been submitted to the RBBP in the past; if there is a possibility that you hold data not known to the RBBP, we would be grateful if you could err on the side of caution and contact us to discuss whether you hold data of value to the archive ([email protected]).

‘Further information on the work of the RBBP, including the species we cover, our reports, and a facility that allows reports to be queried by species and year, can be found at www.rbbp.org.uk.’ 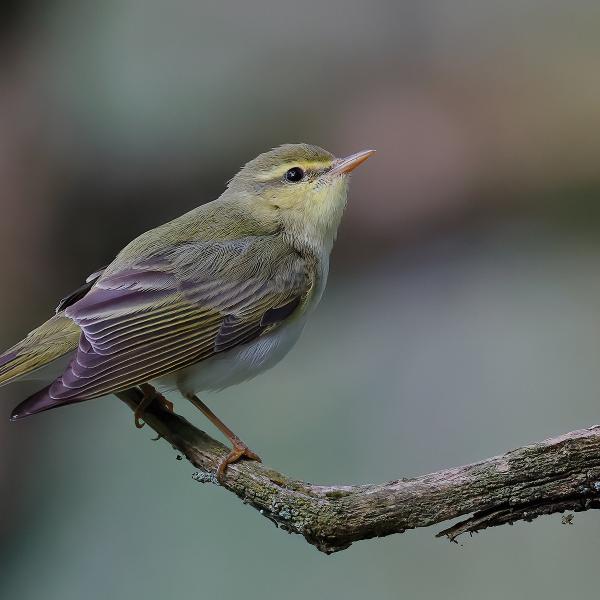 Feathers: an identification guide to the feathers of western European birds
Wild Fell: fighting for nature on a Lake District hill farm